"Sketch for a Short Film in Black and White" 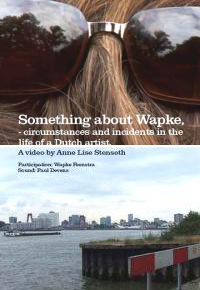 - This is a “portrait” of Wapke Feenstra. She is a visual artist and writer that lives in Rotterdam in The Netherlands. The video deals with identity, history, art and its stereotypes based on my interpretation, related events and stories from Feenstras life and work.

Below you see installation view from Gallery Ram, Oslo

"Borders of Paradise, - from Shades of Blue, to Black, White, Pink or Purple"